Politics In the Workplace: New Report From Perceptyx Finds Politics Has Lasting Impact on Workplaces; Company Support for Voting Significant to Voter Turnout

A survey of over 3,000 employed Americans finds political opinions play a big role within organizations; 46% worry they would be treated differently if they openly disagreed with their manager’s politics; two-thirds have considered looking for a new job due to the political beliefs of their colleagues

As the U.S. nears the 2020 election, conversations around politics are at an all-time high and according to new data from Perceptyx, the employee insights platform, the workplace is no exception. Perceptyx’s survey of over 3,000 working Americans found nearly 7 out of 10 employees have discussed politics with a co-worker in the last year, and more than 40 percent revealed that they have had both a political disagreement at work and that a co-worker has tried to persuade them to change their political party.

“We often think of politics as a taboo topic - along with money and religion - however it turns out partisan conversations are happening regularly in the workplace, and the impact of those is greater than one might think,” said Brett Wells, Ph.D., Director of People Analytics at Perceptyx. “From organizations’ support for voting to potential retaliation for those with differing views, the results of our survey found real implications that stretch beyond the election itself.”

Talking politics also has an impact on organizations, as nearly half of those surveyed report their manager talks openly about supporting a specific candidate in the 2020 presidential election. The effect of this depends on whether their employees share similar beliefs. When comparing employers that are aligned politically vs. those who aren’t, those who share the same political leanings are more likely to actively share their political beliefs at work (75% vs. 31%), feel supported by their manager in making decisions about their health and well-being (86% vs. 60%), feel their manager supports their efforts to balance work and personal life (82% vs. 65%), feel their manager cares about them as a person (85% vs. 69%), and believes their workplace is a psychologically and emotionally healthy place to work (81% vs. 64%).

Nearly half (46%) of employees who don’t agree, or who aren’t sure, worry they would be treated differently if they openly disagreed with their manager’s political beliefs, while 53 percent believe discussing politics at work could negatively impact their career opportunities.

When it comes to colleagues, 48 percent of employees say it is important to work at a company where most people share one’s own political beliefs and attitudes. In fact, 42 percent of employees have considered looking for a new job because of the political beliefs of people they work with. Those surveyed who believe the majority of their co-workers share their political attitudes and beliefs are twice as likely to avoid and try not to work with certain people at work because of their “other side of the fence” political beliefs. For the majority group, this strong in-group favoritism may actually push diverse, opposed thinking out of the organization and attract like-minded job candidates, further strengthening the majority imbalance over time.

Recent reporting has shed light onto how social media companies harvest personal data to target users with political ads, often through unregulated, dishonest content. With 61 percent of respondents noting that they have received most of their news and information about candidates through social media channels, the potential for political polarization is high. When compared to employees who do not receive their information on social media, employees who do are more likely to have tried to persuade a co-worker to change their political party preference (60% vs. 15%), feel more comfortable disagreeing if someone makes a political statement at work, regardless of their job position (65% vs. 39%). Perhaps most shocking, 62 percent of those who get their information from social media admit to avoiding and trying not to work with certain people due to their political beliefs (62% vs. 23%).

“A key takeaway from this data that should not be ignored by organizations should be the power they have to collectively increase voter turnout by providing opportunities and encouragement for their workforce to get to the polls,” said Brett. “Beyond this support however, discussing specific political beliefs should be discouraged, which 57% of those surveyed believe, as individuals already feel ostracized and real implications for career progression could be tampered.” 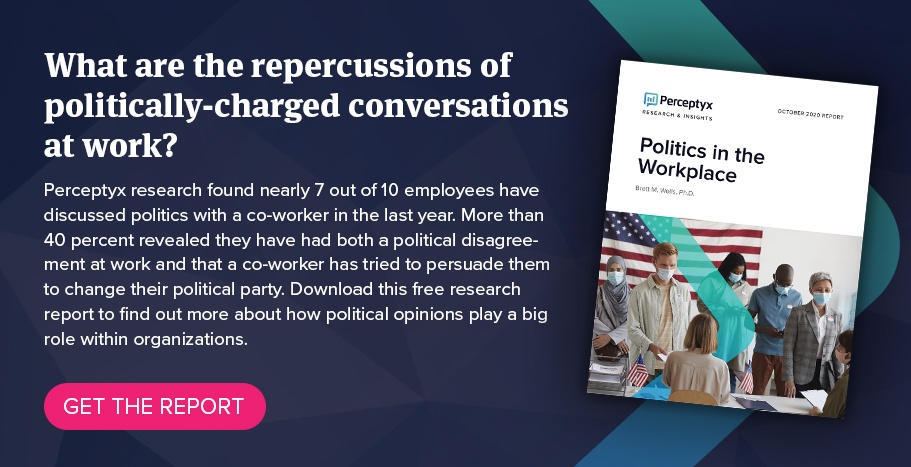