Not Your “Note Taker”: Why Frequent Sexism Persists for Women at Work

There’s no question that the status of women in the workforce continues to improve. When it comes to senior management in organizations, 2021 marked an all-time high with women holding nearly a third (31%) of senior management positions globally. North America is slightly ahead of the curve, with a full third of senior roles now filled by women. In honor of International Women’s Day, a recent Perceptyx study of more than 1,500 working women indicates that most women directly report to another woman, and only 3 in 10 reports that their management ranks are male-dominated.

Yet despite these gains in representation, frequent subtle (and overt) sexism persists. Perceptyx asked about the most common sexist microaggressions faced by women at work, from having expertise questioned to lewd jokes to unwanted touching, and the results were surprising: two-thirds of women report they experience sexist behavior at least sometimes, and one-quarter report three or more offensive behaviors on a frequent or even daily basis.

Perhaps most surprising is that workplace representation didn’t diminish the frequency of these incidents, with many persisting even in organizations dominated by females. Alarmingly, one-third of women report that the most sexist thing they have ever heard in the workplace came out of the mouth of another woman.

While unwanted touching and crass humor still happen quite frequently (with 13% and 15% reporting it occurs frequently or more often), many of the behaviors that cross over into clear sexual harassment are less frequent and have an obvious solution within Human Resource policy. Unfortunately, the slights that may seem more innocuous can have the biggest impact on things like retention, productivity, and employee well-being. According to these data, the top predictors of a woman’s intent to leave their organization are pay inequity; interruptions during meetings; comments about their appearance; being called something other than their name, such as “Sweetheart,” and being asked to take notes in a meeting when that is outside of their job responsibilities.

For example, one of the most common of the microaggressions reported was being interrupted or talked over in meetings, with 1 in 5 reporting it happens at least frequently and twice that many reporting it happens at least sometimes. Those who are commonly interrupted are half as likely to be fully engaged in their jobs, half as likely to feel like they belong, and are 4 times as likely to report being burnt out, regardless of how energizing they find the work itself.

Only about one-third of women report that they rarely experience any of the microaggressions that are driving women to seek employment elsewhere, while half report that they experience at least two of them sometimes. That small difference may not seem like much on the surface, but it has an outsized impact on the retention rates of these women. In fact, the presence of just one sign of disrespect on a regular basis nearly doubles the chances of that employee exiting the organization, and the presence of two triples the chances of exiting. 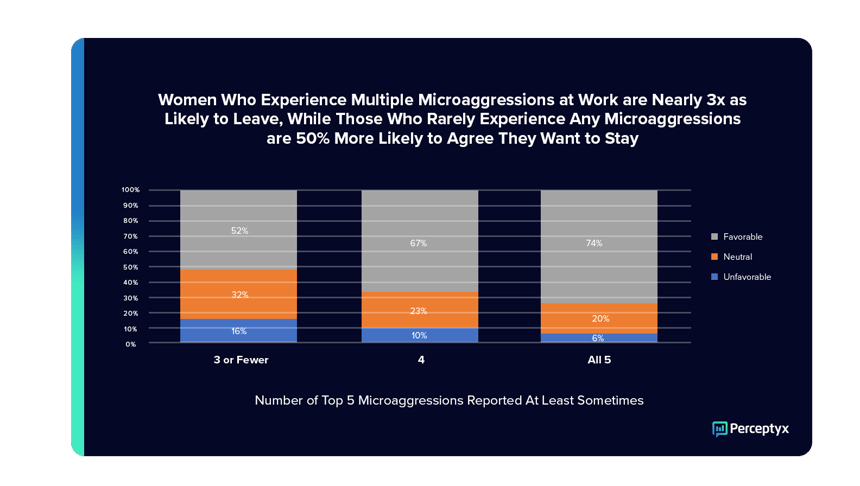 So what can organizations do to ensure that the little things don’t add up to one big attrition problem?