360 Degree Surveys: The Most Important Things To Know

Though many organizations have adopted 360 degree surveys over the last several decades, multi-rater surveys are not a new development. The origins of the 360 survey go back more than 60 years; as early as the 1950s, people had hit upon the idea of soliciting feedback about the strengths and weaknesses of managers and leaders from employees and others who interacted with them in the work context. It wasn’t until the 1990s—when new technology made it easier to collect and sort data—that the use of 360 degree surveys gained wider use.

Although 360 degree feedback surveys have been adopted more widely in the past 25 years, there is still debate about how the data generated from them should be used. Originally conceived as a tool for developmental purposes, some organizations have begun using them for performance evaluations as well.

Advantages Of The 360 Survey

At its best, 360 degree feedback is one of the strongest tools to help people improve and develop as leaders and managers.

The multi-rater input is an opportunity for the subject to get feedback from all the constituencies he or she works with. Used as feedback for development opportunities, the data provided by 360 surveys is very powerful because it represents multiple perspectives and, if well-designed, the survey zeroes in on observable behaviors that are actionable for improvement. It may help to illuminate the data collected in employee census survey responses to questions about management and leadership as well.

When aligned to the competencies important to the organization, 360 feedback is more valuable as a development tool than for performance evaluation. It can provide guidance on how to build competencies useful to the organization for succession plans—and useful for the individual’s growth. It goes well beyond measuring how managers or leaders are perceived by employees to provide a holistic view about how the individual is viewed by peers and other stakeholders.

Multi-rater feedback also provides another piece of information that leaders can use to measure the overall health of the organization. Engagement surveys do that, of course, but understanding where managers are in terms of their need for additional development is also an important health indicator. It provides a high-level view of where development is needed—in communication skills, strategic thinking, or other areas. It can help the organization understand if there are common areas that more than one manager needs to work on so that training, or other self-directed learning opportunities can be provided to increase overall leadership capabilities.

For succession planning, this type of information is invaluable. In the wake of the COVID-19 pandemic, it is now more important than ever to plan for succession. Incorporating 360 degree feedback provides another source of information to help prepare talent for their next role in the organization. Anything organizations can do right now to get future managers and leaders prepared for stepping into new roles is important, because turnover intent has grown across the board in response to expanded employment options post-pandemic.

Like all surveys, 360 degree surveys succeed or fail on the strength of question design. Download our free People Analytics Playbook to learn what you should be asking in your surveys—and how.

In 360 surveys for managers, leaders, or others, there are several important design criteria.

A well-designed 360 survey is one that contains items designed to gauge competency, which are actionable and provide opportunities to change or do things differently. It’s most important that items are well-written and geared toward being actionable, so the feedback is clear and useful.

As a result, for 360 surveys, there typically are no “silver bullet” items. Instead, survey items need to be designed to fit the context and the competency model, and be observable, behavioral, actionable, and scalable, to zero in on the ideal state for those competencies.

While 360 surveys can be very useful for development purposes, there are some circumstances where this type of survey does not fit.

Perhaps the biggest pitfall is using 360 surveys for administrative decision making. Reliance on 360 degree feedback for decisions regarding promotion introduces bias into the ratings, testing the validity of the data. If a group of employees is under consideration for advancement, their rating of competitors is unlikely to be unbiased, rendering the data unreliable. Use of this type of data for making administrative decisions could also cause legal issues.

Another potential drawback is attempting to measure things that a 360 survey cannot reliably measure, such as knowledge or personality. For measuring some skills—delegation for example—and abilities such as communication and strategic thinking, 360 degree feedback can be useful, because these are developable skills. That’s where the focus should always be with 360 degree surveys.

Whether your organization is considering using 360 surveys for managers, leaders, top talent, or other employees, getting your survey right is critical, for the reasons outlined in the previous sections. Because 360 degree surveys seek feedback about individuals, they must be well-designed to capture nuances in rater perceptions. Also, many organizations do not have competency models for aligning 360 surveys to organizational needs, which is crucial to getting the most out of multi-rater surveys.

At Perceptyx, helping companies identify barriers to improvement is our goal. With custom surveys, an advanced people analytics platform, and expertise in all aspects of survey design, strategy, and communication, we can help you create effective 360 degree feedback survey programs and identify what you should be asking employees to improve the experience in your company. Get in touch and let us show you how. 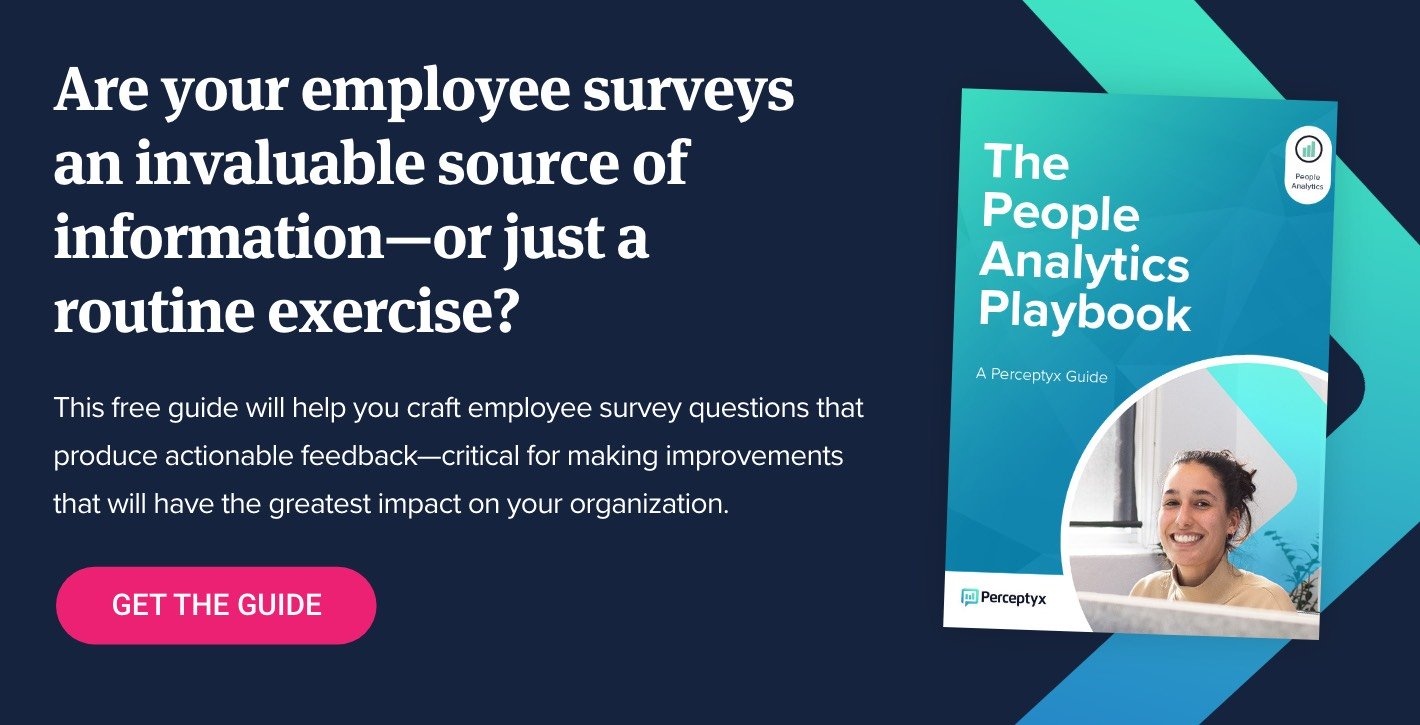