Judging from the media headlines, layoff anxiety has swept many sectors of the economy. Twitter CEO Elon Musk is running his latest acquisition with a skeleton crew after slashing thousands of jobs. Amazon and Meta also shed thousands of jobs in November. Alphabet CEO Sundar Pichai is offering no assurances regarding organizational job cuts in 2023. According to tech jobs tracking website Layoffs.fyi, more than 51,000 tech jobs were lost in November from 196 companies. The layoffs in November alone were more than a third of the total (143,000) for 2022. Other sectors also show signs of concern. AdAge reported that the ad business cut 2,500 jobs in November amidst media layoffs in other sectors. The recent “mega-merger” between US supermarket giants Kroger and Albertsons has also sparked layoff fears.

In contrast to this seemingly dire news, the monthly employment report from the Bureau of Labor Statistics shows a net increase of 263,000 jobs. That’s a solid increase for the U.S. labor market, which boasts a 3.7% unemployment rate and has continued to grow steadily in recent months despite concerns about negative market fundamentals and an impending recession. According to the BLS, "notable job gains occurred in leisure and hospitality [88,000 jobs added], health care [45,000], and government [42,000].” Employment declined in retail trade as well as in transportation and warehousing.

With this unsettled state of play as background, Perceptyx conducted December 2022 panel research on how these new rounds of lay-offs are affecting the employee experience, intent to stay, and overall well-being. In general, we found that 27% of employees have had some layoffs at their organization over the past six months, with half of that group experiencing a layoff themselves. Additionally, 1 in 8 employees has lost a direct supervisor to a layoff.

The larger result is an overall increase in layoff anxiety. Job loss jitters were present in more than half of the employees in nearly every subgroup studied, with the most prominent concerns among young, white-collar dads. 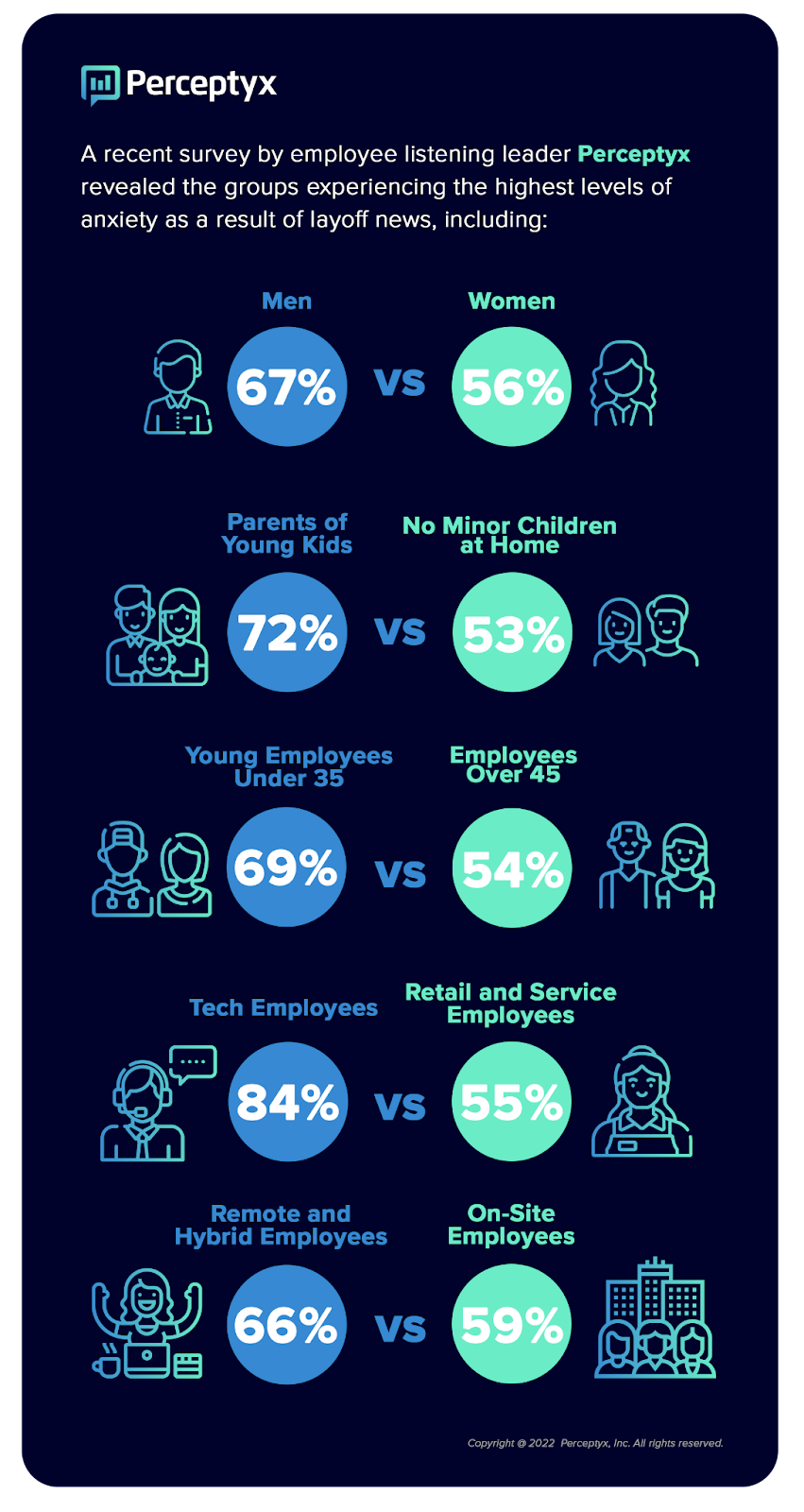 Open, clear communication is one strategy to mitigate layoff anxiety. One notable finding was that employees display higher levels of worry when there was speculation about layoffs versus when their organization had issued official communication about actual cuts. Ninety percent of employees who heard reduction-in-force rumors had some layoff anxiety — 8 points higher than those working in organizations that had actually executed lay-off actions, highlighting the importance of communicating not just frequently but authentically to limit rumor-mongering and the resulting anxiety.

Employers must do their best to get ahead of the worry. Almost two-thirds of the workforce is walking around in a state of anxiety, and it’s accompanied by all sorts of negative behaviors, both in the workplace and at home. At home, we’ve seen new developments of sleep disruptions, periods of low energy, and using food or substances as a way to cope. At work, we see snapping at coworkers, increased job-seeking behaviors, and the withholding of discretionary effort.

Layoff Anxiety Is Bad for Business

Nearly twice as many employees say that recent layoff news has increased their desire to look for a new job versus decreasing it. This number jumps to nearly 3x for employees working for organizations that have had recent layoffs. Employees whose organizations haven’t had any layoffs are still slightly more likely to say their job-seeking desire has increased, though 7 out of 10 say news of layoffs has had no impact on their job-searching behavior. Not all reported layoffs or furloughs resulted in long-term unemployment. Most of those employees (65%) are back at work, and among those, the majority are working for the same company that originally let them go. Those rebounds don’t plan to stay with that company if they don’t have to, however, as they are 5x as likely to be looking for a job elsewhere.

Employees with layoff anxiety are 50% more likely to indicate that they don’t intend to be with the organization this time next year. While it makes sense when layoffs are occurring that employees will be looking elsewhere, those employees with anxiety are the ones most likely to look. Among employees with no anxiety, 62% exhibited no job-seeking behavior in the past 30 days and 2 in 3 plan to do even less in the next 60 days. Meanwhile, among those with high anxiety, 79% exhibited job-seeking behavior in the past 30 days, and more than 7 in 10 plan to increase their efforts over the next 60 days. This behavior tracks with anxiety level, with more anxious employees being more likely to seek new jobs.

Workplace relationships are also strained by anxiety and layoffs. Regardless of the proximity to the layoffs, recent news has more than 12% of employees reporting that they have been short-tempered and snapping at co-workers. This number nearly doubles (23%) for those either directly or indirectly impacted by a layoff. Nearly 3 in 5 employees in organizations where layoffs have recently occurred say it has been difficult to maintain relationships with coworkers since people were let go.

Layoff Anxiety Is Bad for Well-Being

The presence of anxiety relates to increased mental or physical exhaustion at the end of the working day. Employees experiencing layoff anxiety are 1.5x as likely to feel physically exhausted and 1.3x as likely to feel mentally exhausted. These differences double when people report high anxiety. Whether an employee has been exposed to layoffs at their own company or just heard about recent job cuts in the news, they are reporting negative effects on their well-being. 1 out of every 4 employees reports periods of anxiety, low energy, and bouts of sadness.

If your organization has conducted layoffs this year, is considering them in the near term, or just attempting to maintain business in the face of tough economic news around you, what strategies can you use to mitigate the layoff anxiety of your employees?

Helping Employees through Layoffs and Other Organizational Changes

Unmanaged layoff anxiety takes its toll, not just on employees individually, but on the organization collectively as employees miss work, struggle with productivity, and arrive less well-rested and focused on the task at hand. Organizations that strive to create a healthy and engaged workplace when times are good — and then continue the work in a purposeful way when times are tough — will reap the benefits of greater retention and productivity. By remaining physically and emotionally fit to contribute to the workforce, their families, and their communities, the employees will also benefit.

As an experienced listening partner, Perceptyx can help your organization conduct all the meaningful conversations needed to fully and comprehensively understand the employee experience during disruptive times. To learn more about how we can help, schedule a meeting with a team member.